Beyond exoticism: African realities of an exhibition

The exhibition “Ruth Baumgarte: Vision Africa. Turn of the fire” opened up yesterday at the Städtische Museum Brunswieck with a ceremonial act. I was lucky enough to be invited as well. The show displays selected pieces of Baumgartes Oeuvre, who travelled frequently to South and East-Africa from the 1980ies on. It is a very interesting exhibition that does not obey to the typical colonial-rule style, when people and landscapes are painted as exhibits on display. Here they are presented from a subjective perspective, an artist point of view. The exhibition can be visited from March, 24th to July, 7th, 2019 at the museum at the Löwenwall.

A show act out of the blue

Maybe the announced reading of the actress Hannelore Hoger might have been another attraction pole on this sunny afternoon. Either way, the event is well attended. Everybody is chatting with each other, when a sudden performance takes place. From close to scratch, a guy with a bare torso blazes his trail through the crowd. He moves right to the place where a table and chair were placed for the reading. For that moment, both, the astonishment and the irritation of the audience is that big, that nobody really knows whether this is part of the show. The guy who poses and positions in front of the guests like Arnold Schwarzenegger in a bodybuilding contest finally makes everybody grin with his whistle stop. After his two minutes of fame the guy is unobtrusively withdrawn from the stage. Still, he is allowed to further assist the ceremony and later on even talks to Mrs. Hoger.

A glimpse of Africa

After the limelight-grabber has left the scene the official ceremony starts with a welcoming speech by Dr. Peter Joch, the curator. Joch grants us an interesting insight into the motives of Baumgarte for her artistic work and her affection for parts of Africa. I deliberately write “parts of Africa” on purpose because the African continent consists of 50 different nations and more than 2.000 different languages. For that reason I do not think it is indicated to speak of Africa in its entirety. Even though I have only travelled a small part of Africa myself (North Africa and South Africa), I still claim that THE African or THE Africa as a cultural or political entity does not exist. Joch points out that Baumgarte did paint her figures contrary to the exotic imaginations of colonial masters and not from a voyeuristic point of view. Beyond any exoticism the artist’s point of view is according to Joch to display the socio-cultural and political realities of the countries visited and to portrait developments and sensed abysses.

After the acceptance and greeting speech of Baumgarte’s son and head of the namesake foundation the actress Hannelore Hoger enters the stage. Hoger we have been told before was a close mate of Baumgarte. The actress reads out aloud three travel reports. The first one comes from a German correspondent of the Spiegel magazine, the other two were penned by some Kenyan award-winning journalist. All three articles offer interesting insights into a small part of East-African life. Especially the texts of the Kenyan narrate on the social change of the Moloch Nairobi, his hometown; he once had to leave for South Africa. However, in my point of view I note that particularly the last two stories were pretty long and quite interlaced. It takes all the concentration one has to keep on following the narration. I would have preferred shorter and more concise stories. Plus: I can imagine that after more than one hour of plain listening with a dry throat I might not have been the only one who was longing for some water.

Having enjoyed a cold one down my throat, my boyfriend and me make a tour through the exhibition. Already upon entering the museum we were impressed by the bright colours of the pieces. Code colours like red, blue and yellow dominate the paintings. There are literally setting the paintings “on fire”, just as the exhibition’s title suggests.

I am far from being able to judge an artist’s paintings professionally. I can only tell in layman’s terms whether I like pictures or not, whether I find them appealing to my standards or whether they meet my experience made in Africa. Simply the colour’s impact of the paintings impressed me as much as the way of portrayal did. From a distance the spirited lines and bars of the oil-based paint form figures, landscapes and animals. A closer look, however, reveals that landscape and figure are one and only the eye of the observer composes a head, a hand or an arm in his mind. The aquarelles, drawings and paintings express an open-minded, crucial but affectionate view on the African countries visited and its people. An exhibition, worth visiting for any African-aficionado or anybody whoever intends to travel there once. But also for anybody else the unpretentious view on the continent that is often connected to poverty, wars, backwardness and helplessness in the western media is absolutely worthwhile to go there – provided the visitor does not exclude a critical reflection of his canned opinion. 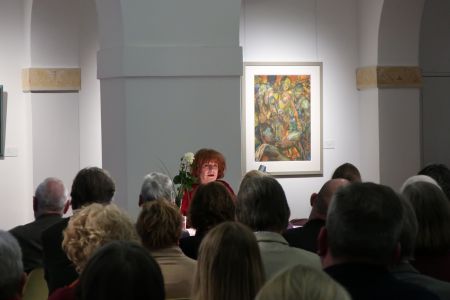 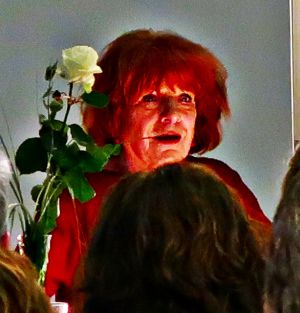 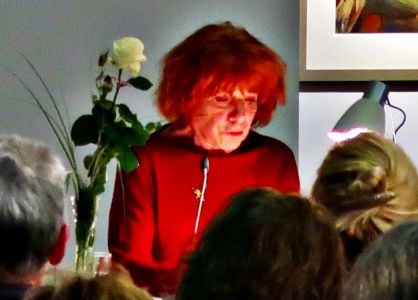 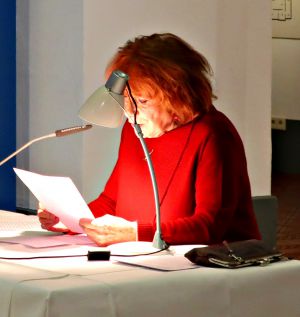 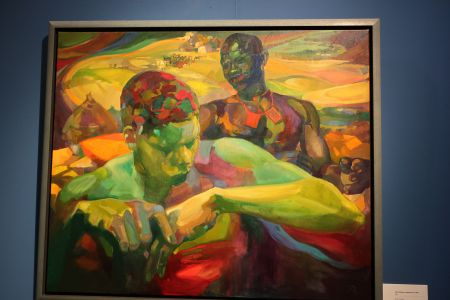 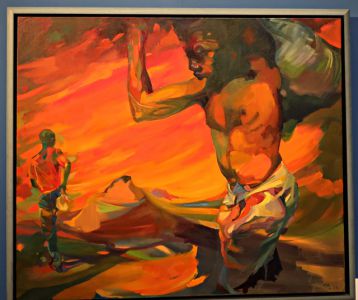 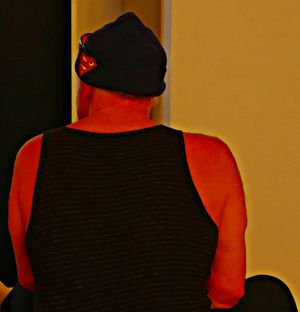 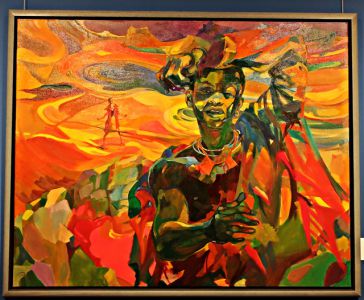 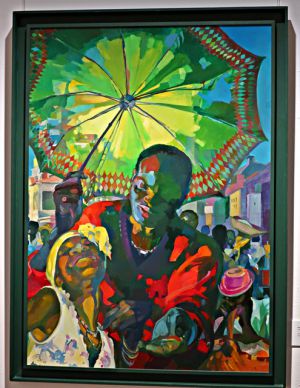