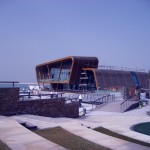 Sometimes, inconsiderable sentences turn out to be avalanches in disguise. What am I talking about? An article called “Carrot and Stick Diplomacy” by Matthias Sailer. The paragraph: “Bearing this in mind, it does not come as a complete surprise to discover that the Emirate of Dubai has refused to extend the licence of the Gulf Research Centre, one of the most prestigious social science think tanks in the region. It has been based in Dubai for the past ten years” made me prick my ears.

Doing a little research on that I found out that the Gulf Research Centre (GRC) already tried in July 2010 to renew its licence, which was long before the revolution started in the Arab World in December 2010 in Tunisia. Even though the article by Sailer traces the reasons back to the latest uprisings I am not quite convinced by that. Was it an early reaction by Dubai government due to “nervousness in the Gulf”, a possible preventative measure? The GRC itself stated that no “reason in written form” was given by the government that could explain Dubai’s refusal for a renewal of the licence. Does this allow for the conclusion that reasons were stated verbally?

According to an article published in the magazine “zenith”, too tight relations to foreign bodies, close contacts to the media and too much critic on what is going wrong in the Gulf Region might be the answer.

What is the GRC all about? In order to classify the reputation of the research centre it might be helpful to get to know that it ranked two from all MENA region think thanks examined in 2010 by the Think Tanks and Civil Societies Programme of the University of Pennsylvania

Another nail in the coffin

What does that mean for Dubai’s reputation? ‘The Gulf blog‘ puts it this way: ‘This is another nail in the coffin of the liberal dream of the UAE.’ Two things are remarkable about this incident: (1) No press coverage in the Western media on the topic in the first place. (2) Secondly, in the times of social media and social networks Dubai should be aware of the fact that hidening negative news is becoming more difficult, almost impossible. The Dubai Government may consider this: Why not change tactics and become more transparent?