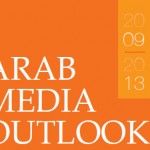 The third edition is out since february. The third report seems to have been published without PriceWaterhouseCoopers but still provides us again with an overview of the media sector, this time for the years 2009-2013.

At the beginning let us take a look on the sector “online & mobile”. As the previous studies showed us already (see ), the Gulf States show the highest growing rates in internet and mobile services. Due to the high amount of young citizens, the use of so called online-media rises disproportionately high.

Arabic countries do only have a wideband access of 12 % in total (compared to 64% in the United States and 61% in Europe). However, Gulf-States like Qatar dispose of distribution rate of 84% and are thus above average. The biggest Arab Countries like Egypt and Saudi Arabia are said to have an access-rate of 70% in 2013.

Social Media is the most discussed topic in the Arabic States. Three big players are ruling the market. Facebook is no. 1, followed by Twitter and FMyLife as well as one local player: “Maktoob”. Another “big thing” and that might surprise our readers is the UAE Women’s Network as this statistic shows: Alexa Statistic.

Twitter started on the Arabian market in October 2009 artwitter.com Again, the microblogging service could report a triumphal procession. The study also displays other local providers, such as Baidu from China which succeeded in competing with Google. Certainly, when comparing one should not forget about the size and the structure of the Chinese market.

Mobile services, like Web-TV, are on the rise on the Arabian market. The “internet phase” that areas like the United States and Europe underwent first, has been skipped in this area. The market aims to reach 100% access of mobile services by 2013: “In fact, the Middle East has been a leader in Mobile TV development with the recent launch of services in Iraq and the award of the Mobile TV licence in the UAE, with further developments also taking place in Libya and Qatar.”

Social media services are mainly used via mobile devices. One reason is that such services have become more achievable recently. Mobile news services as well as portable devices, like “E-Books”, are recorded to witness a stronger demand.

Despite all success there is still a lot of work ahead. Although the Arabian market might be state-of-the-art technically there are still some other problems unsolved yet.