The Kurds or the question of social coexistance

Maybe I was one of the few people who are truely unexperienced and without bias taking part in the book launch at the Brunsviga that evening. I do not really know much about the Kurds, besides that the people are spread over four different countries: Iraq, Iran, Turkey and Syria. I heard about them on and off: In the course of America’s Iraq war against Saddam Hussein and lastly in conjunction with the Syrian war, when Turkey started its attacks on Kurdish territory within North Syria – with the help of German tanks. I became aware of the set of problems the Kurds are facing in Turkey in May 1998 for the first time when my former boy-friend made interviews with Kurds in Istanbul for his master thesis. At that time I realized how pressurized Kurds were and are. Still, my knowledge is marginal, that’s why I wanted to know more.

In advance I downloaded from the internet an exemplary excerpt of the book “Die Kurden. Ein Volk zwischen Unterdrückung und Rebellion“ by Kerem Schamberger and Michael Meyen. Additionally I dealt with the subject of Rojava a little bit, the democratic federation of North Syria, which is in some places wrongly designated as the Kurds state.

At the beginning of this lecture Schamberger points out that two narratives are mainly circulating around the Kurds: the one of Kurds as being terrorists and the one of Kurds as perpetual victims. However the book’s point is on a better “organization of social coexistence”, Schamberger says, referring thereby to the arms supply from Germany to Turkey. Unfortunately, the issue is not further discussed later on, neither in his lecture nor in the following discussion. At large, the German-Turkish postgraduate explains, they have interviewed twelve people for the script, Kurds or experts on that topic. By means of those narrations the two discuss the “Kurdish question” in their book.

We respectively I got to know – all others in the room may already know it – that the Kurds have been existing for more than a 1.000 years and that they descend from a tribe called “Mäder”. Due to the fact that everybody – according to Schamberger’s assumption – knows about the historical myth of the blacksmith already, he cuts the story short. Due to the legend the blacksmith stroke the tyrant Zaehak dead. An incident that allegedly took place on March 21, 1234 and thus established the Kurdish New Year Party (Nowruz). Well, it is a pity for me that this part was shortened. But I might use the internet as a source for more information on that topic.
The lecture is structured in four parts: two reading sections by Michael Meyen and two speeches in which Schamberger reports with words and pictures on his visits of Kurdish territory within Turkey and North Syria. He focuses thereby on the Turkish attack in Afrin in January 2018 and the Turkish offensive towards the PKK in 2015. For somebody who is not familiar with the details just like me it is partly not easy to follow the lecture respectively to understand the context in every way.

The rest of the lecture is about Rojava, the democratic federation of North Syria. Schamberger explains that the federation consists of three columns: a democratic system, a revolution aiming at the abolition of patriarchy and the ecological question, i.e. the self-supply of the Kurds.

Within the discussion following the lecutre and the reading section both authors stress that project „Rojava“ is still in its fledgling stage. The social relation between men and women within the region is still patriarchal. By the way, in Germany too, Schamberger adds with a wink. Other questions from the attendees are about the Gazi-Protest in 2013 in Istanbul, the articles of association of the Kurdish liberation movement and a tweet of Donald Trump, according to which a buffer zone, 32 km long, is supposed to be established in North Syria.

The question whether the Kurdish liberation movement plans to erect a state of its own is answered by Schamberger as follows: “No, capitalism- decentralism-federalism, there are different concepts from different Kurdish places of residence, but always within the borders of Syria.” 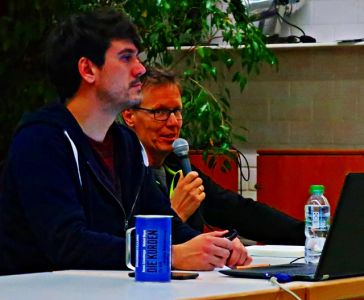 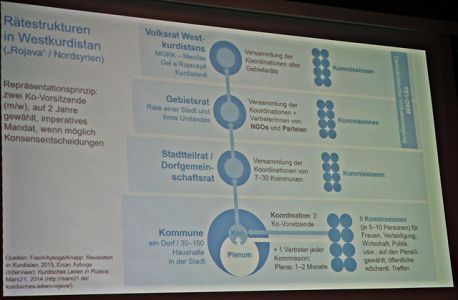 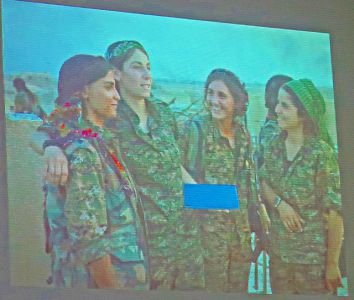 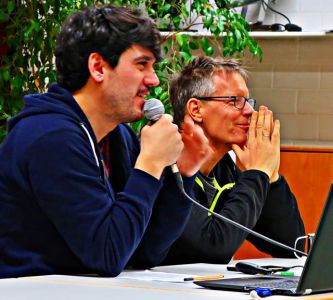