Only a few square meters become a fateful space for four people. They do not know each other, they meet accidently and cannot escape. In the end their inner-life is literally off-wall and everything has changed. This involuntary skinning of four actors has been staged by the Italian Sara Angius in a play called wallpaper, consisting of a pacy, multi-faceted and breathtaking choreography. Last Saturday I visited the performance at the LOT-Theater.

Dancing instead of talking

The whole thing starts with a misunderstanding. I get my hands on the play’s leaflet at my gym. I skim the plot quickly. I than buy my ticket with the firm conviction that “Wallpaper” is a philosophic play. Waiting for admission last Saturday disillusionment takes hold on me: dance theatre! I must admit: I did not expect it on the one hand. On the other hand I was not sure whether I was ready for it either. Anyway, I was in it already.

More flexible than a felt- or rubber doll

And it was worth it! At the beginning everything seems to be very abstract to me. It takes some minutes to get used to the choreography. Initially I am trying to find out what the plot is. After some time I am right in the middle of abnormal bending, unbelievable twisting and turns of the dancers. And it is not only the dancing; also their facial expression is spellbinding. Again and again I wonder whether I could do the same. Concerning the dancing part, well, I do not stand a chance. The performance reminds me of felt- or rubber dolls from my childhood. They had joints you could turn in all directions and through 360 degrees. And I think to myself: Unbelievable, they really do it.

The whole show (play time one hour without break) is over so quickly that I can only grasp what has just happened after a while. One of the protagonists, for example, loses literally her head and later on her hand. The others pick up the pieces, trying to help. It does not help – she remains headless. Another one tries to paste a piece of wallpaper Sisyphus-like back on the wall but cannot manage it. A third actress has such a nervous breakdown in front of the wall that the nonexistent windows crack.

Besides the choreography I like the mix of tunes. It underlines the different characters. Spoken metaphorical every performer tries to cover its mental abyss. Just like sticking wallpaper onto the wall so that nobody can see what’s behind. It’s just that the lanes do not act as they should. They do not stick, they come off again. Finally, they are hanging in stripes from the wall such as the uncovered soul.
My conclusion: Sometimes it is okay not to know in advance what is going to happen. Otherwise you might miss out on something. 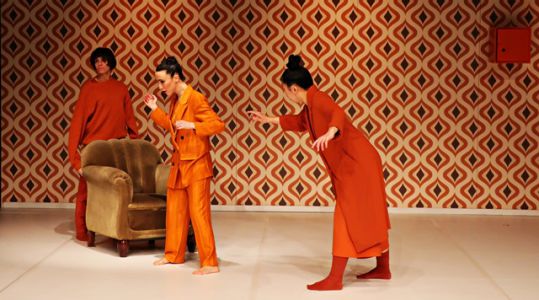 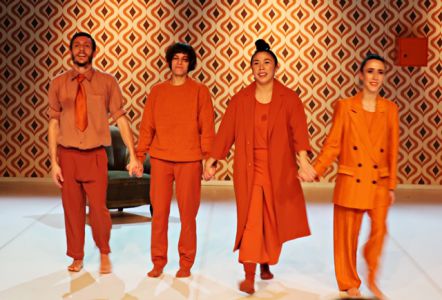