Under the spell of the witch

The Harz mountains, a place of magic, mysticism and fairy tales which experiences its annual peak on Beltaine. A night when people say officially goodbye to winter time hello to May. Witches are emblem of that night and can be found manifold with the Harz region: either hanging above the door or sitting in front of the house. And sometimes they drink beer. Why is it so?

I have this theory: Maybe the witches get an unpleasant feeling in the face of Artificial Intelligence and they are afraid of losing their jobs to robots that might dance on the witches’ dance floor instead of them. Well, a pretty scary idea to me that might induce some witches to drown their sorrows. But not yet.

Under the witche’s spell we did our tour last sunday, one day before Beltaine. Parts of the hiking trail from Todtenrode via Altenbrak to the Wendefurth dam followed the “Harzer Hexenstieg”. That’ why the trail was pretty crowded exploiting the good weather too. However, we were surprised by the crowd of people and cars at the city limits of Altenbrak. The secret could be easily disclosed. Actually, this was not about being close to nature but being close to something to eat: the trout farm of the Bode Valley at Altenbrak. At the pond of the trout farm various male creatures could stimulate its reward center in the brain easily. Where else could that poor little creature go but to get caught on the hook? Sense of achievement guaranteed. Just around the corner there was the trout killing floor located to put the pitiable little creatures afterwards on the BBQ. Well, it’s just like the French say: “chacun à son goût.” Tasteful or cheesiness? Is this supposed to be the hunting ground of the modern, domesticated men, dominated by its genes of a former hunter and assembler as he was in the ancient times? I leave this sociological question unanswered so far.

Back to our hiking-tour: Next to the numerous stamp places the chosen trail turned out to be an eldorado of spectacular look-outs. Allowedly, the weather cooperated perfectly that day. However it is a fact that the Bode Vally is a definite piece of jewellery of the Harz. On the way from Altenbrak to Wendefurth we passed the house of a witch (see picture). A skew building standing the test of time. But who knows, with a little commitment it might become a perect weekend-hideaway or retirement home?

From the Wendefurt dam wandering in direction of Almsfeld we could finally satisfy our thirst for adventure. Again, we were forced to climb over numerous toppled down trees. After having successfully collected stamps (five this time) we slowly let die away this wonderful hiking trip at the Guesthouse Todtenrode. 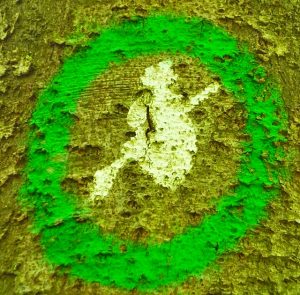 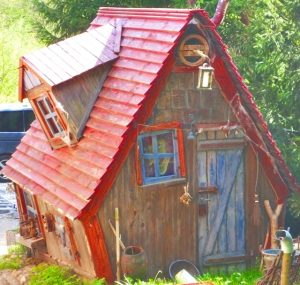