After a stressful working week we were looking forward to a small walking tour this time. 15,4 km were on the schedule according to Google Maps, which were supposed to be managed in 3.5 hours. Four stamps of the “Harzer Wandernadel” should be collected on the way. How this alledged small round trip became one of the longest tours ever will be revealed subsequently in this report. Just so much in advance: I left Brunswick this morning at 9:24 and returned at midnight!

Let’s proceed in sequential order. We parked the car at the Maliniusteich, an old coal mining lake close to Straßberg in Saxony-Anhalt. From there we only had to conquer the next two kilometres to our first target: the Kiliansteiche. There we stamped no. 211 in our collection book. I do not consider the Kiliansteiche as one of the most rewarding destination within the Harz mountains, that’s why we did not stay long also because there are no seating-accommodations. From that place we walked over the Milchweg (milky way) to Straßberg. From Straßberg we took the Selkestieg to Silberhütte (silver hut), to collect stamp no. 176, the Uhlenköpfe Hänichen. On the whole everything turned out to be fine – so far. Meanwhile it was three o’clock in the afternoon. That’s when the unexpected adventure began.

While we had been astonished to see a warning sign because of timber works at the Uhlenköpfe Hänichen, we missed them later on. First of all: signposting from Silberhütte to Hellergrund is, friendly said, lausy, because it is simply not there. After having asked the second local person for the way he told us that were not the only ones today who could not find the right trail. However, I doubt that many have been successful on that trip and reached the Hellergrund in the end. Fortunately, his description was very precise otherwise we would have been lost in space pretty soon. However, meanwhile I was not sure whether this trail would lead us anywhere. Stromfront “Friedericke” from the beginning of this year had obviously left a swath of destruction at this part of the Harz. We felt like moving in a parallel world, all alone in the world, creeping over sticks and stones. After some trials and tribulations and with the help of friendly inhabitants we finally reached Birnbaumteich after a one-hour-walk (nota bene: we are talking about a 2-km-walk here). At Birnbaum we wondered briefly whether to moisten our thirsty throats with some delicious coffee. Because we were running out of time (and daylight), not knowing what the next two kilometres would be looking like, we decided not to indulge into that opportunity. A clever move as we learned some time later.

Once again we were faced with a couple of climbing units along the way and upon crawling under the trees we could even teach ourselves “Limbodance”. At first we missed the crossing to stamp no. 194 as signposts were missing and toppled trees blocked the way. Suddenly we realized that we had just walked over the mountain and were about to reach our starting point once again. That meant we were running in cirlces!!! Meanwhile it was about six o’clock in the afternoon. We walked back to the linkage. Coming from the other side of the trail this time we managed to identify the right turn and reached stamp no. 194. This place once again look unspectacular to me. Two women that we have met on the way (the only ones that day!!!) told us that the way back from Hellergrund to the Grube Glasebach would be as difficult as our way to Hellergrund because of toppled trees and the like. They said that they needed 1.5 hours for three kilometres – and they really seemed to be in shape. Well because of rutty tracks we could not see the actual walking trail anyway and therefore finally walked along the motorway – absolutely disaffected, half starved and parched. I must say that I really do love those “Harvester”-ways which lead nowhere in the end. Succinct: We did not run out of “running gags” that day.

Back in Straßberg we collected our final stamp for this day: no 175 at the Grube Glasebach, just before sunset. Now we only had to walk another one hour back to the car park at the Maliniusteich (including a very steep climb). Absolutely enervated, nerves at breaking-point, dehydrated and definitely starved we finally reached the car at 8:30 pm. Chugging over country roads (Attention: animals from the right side), classifying red deer, we reached Bad Harzburg just after my train has departed. That made me wait for another loveley 40 minutes at the train station before my train moved back to Brunswieck and I finally read my home at midnight. In the meantime I had been on my feet for 17 hours (!!!) – that kills the strongest blonde. One thing was for sure: Sunday is day off!

My conclusion afte the third tour along the Selke river: modest stamp places, lausy signposts, surefootedness and a hard-boiled shape are a must paired with the will to become Stempelkaiserin (stamp empress) no matter what! In other words: Not for the faint-hearted! 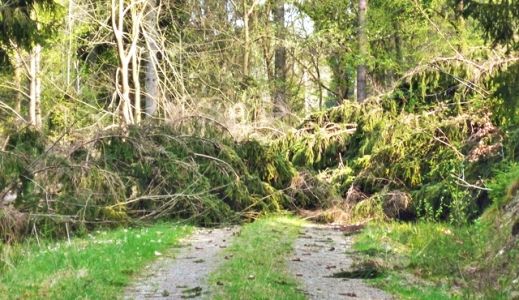 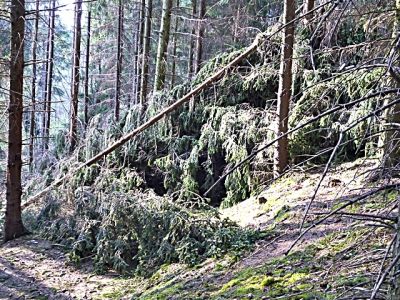 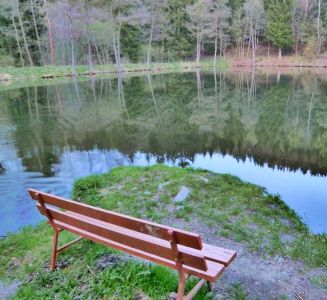