We are approaching our first Covid-19 winter and this is serious: There is again talk about social distancing, about wearing a mask everywhere and about social isolation. Prior to a next possible shutdown I need something for the heart to keep it in me for the dark time of „solitary confinement“: An enchanted forest. Where can I find it? Of course at the edge of the Harz Mountains at Bad Grund. And that’s where I go today. We meet King Hübich and his home, we face a roast pork amidst the forest and walk for a short period in Canada. It is so good that the Harz exists otherwise I would have to invent it. So, accompany me on a small fairy tale tour far away from daily hassles.

My way to the basement
We start our tour at the city limits of Münchehof walking in direction of Wildemann. We walk along the Pandelbachtal and listen to the rustle of the nearby watercourse of the same name. The stream has so much water by now that it is enough to form a small waterfall.

After a while and a slight but steady ascent we reach our first goal: the memorial place of Wimmerstein. The name comes for a good reason: „At this place neighbours and friends found Friedrich Wiemer. After a visit of his relativs at Lautenthal he got into a snow storm and freezed to death. On February 14th, 1847 he was buried at Bad Grund“, that’s what the inscription tells us. Christian played around with this story and came out with this: Wiemer had too much alcohol upon his visit and might have lost his orientation within the snow storm. Was that about his heritage?

From Wimmerstein we continue to the cellar. No, not the one you are thinking of but a mountain hut above the memorial place. At the hut we turn right in direction of the „Spinne“, a spider for hikers.

Baptism of fire at the Iberger Albertturm
At the spider we turn right again. We make a short stop at the lime works Winterberg. Shortly after that we reach our next goal, the Iberger Albertturm. Well a saying goes that you have to sweat first before you can enjoy relaxation, therefore we climb onto the Albertturm (tower) at first and then sit down for a coffee break.

The view from the tower onto the autumn leaves is really nice. We can even see Bad Grund from here although the sight is slightly foggy today.

At the restaurant we find out that the place is a „Bierschutzgebiet“ (beer protection area). That is a good start at least. However it is just noon so we better stick to our coffee. We ask the friendly waitress for the height of the Alberttower. Well, she answers, she does not know the exact height but she knows that the tower has 182 steps. Okay, how does she know? Well, it was her baptism of fire, so to say. On her first day in her new job she had to climb all the stairs up to the top and had to count the steps. The deal was that in case of a miscount she would have to do it again. Well, it worked out fine for her.

At the roast pork
It is lunch time when we reach the roast pork. Well not an interesting spot for somebody like me, being a vegetarian. I am not even sure how crisp a piece of meat can be in this humid weather. To solve the riddle: The Schweinebraten (roast pork) is a major crossing at the east flank of the Iberg north of Bad Grund. From here star-shaped paths run in all directions. If you go south east then you reach the Taternplatz at the federal highway 242.

Turning around the corner we witness our legend: The enchanted forest revived, was renovated and offers different events and activities, both for kids and adults. We like that, just the right thing to do in order to get away from it all.

It is not an option for today because the dwarf king Hübich is waiting for us in his home: the Hübichenstein. We cross the devil’s ground and pass by the Ibergsiedlung, which was build in 1938. Christian tells me that immigrant workers from South Tyrol were settled up her with their families in order to work at the lime works of Winterberg.

We reach Hübichenstein. According to the legend dwarf king Hübich is master of this lime rock guarded by an eagle. Moreover, the rock is a marvellous lookout above Bad Grund, well-visible already from a distance.

Hiking in Canada
Even though international travelling is not possible for the time being, we made it to Canada: just a few steps away from the Hübichenstein the „WeltWald Harz“ starts. It is exactly the right season to watch the forest in all ist autumn colours. Due to the fall break many people are around here. We take the Horizontalweg at the entrance and find ourselves in the middle of Canada, at least according to the signposting.

From the Horizontalweg you can enjoy a magnificent view onto Bad Grund and its valleys as well as onto the former Ibergsiedlung. We reach the crossing at the Koreaweg and take the exit to the street. From here we walk along the edge of the forest, cross the street and turn right into a farm road which is not signposted. Fortunately Christian checked out the path the day before with his mountainbike.

Passing by curious looking cows and horses we reach the Rabental walking over muddy roads. Once again we cross the street and attain the path back to Münchehof which is also not signposted. We walk along the huge band-conveyor of the Fels-Werke GmbH which reminds me of the former German-German border. Taking another country road we reach our starting point close to the mountain hut at the Pandelbach. A really nice tour of about 18 km with many interesting spots alongside the way – just the right thing for a Sunday excursion. 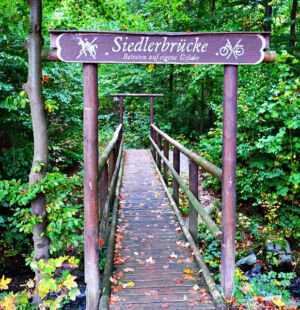 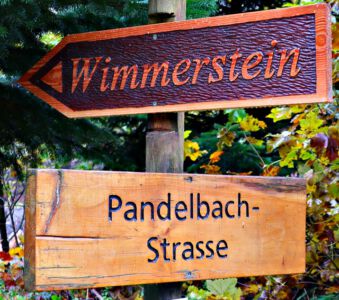 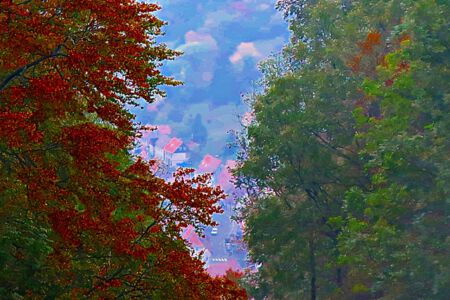 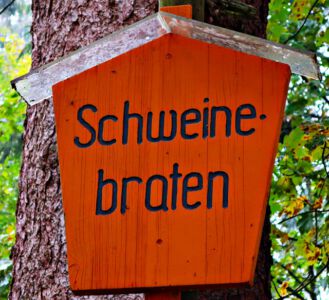 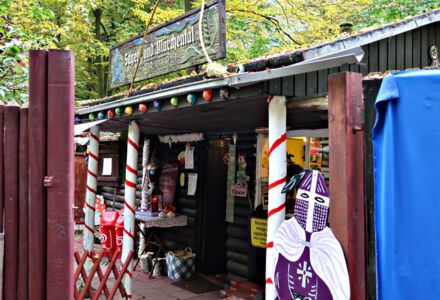