How deep is their love? 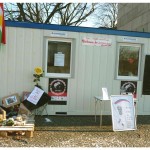 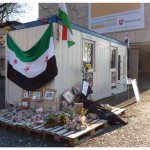 Is freedom a question of money or decency? After the failure of the UN-Resolution last friday and the reasons given for the decision that China and Russia consider the economic ties towards the Syrian Regime as more important than the daily victims of the struggle for freedom against Assad’s dictatorship, lack of understanding might be the nicest feeling one can show to both states.

At once the thought creeps in that neither China nor Russia, the latter already struggles against protests towards despot Putin, asks for similar conditions as the Syrian regimes witnesses them right now. For a long time the government arranged itself quite well with the people suffering from oppression quitely, but suddenly the revolt is spreading. At first the resistance goes through North Africa, now it is the Middle East that shouts “kaifayah.

Nevertheless one should not forget that Syria has been on the United States list called the “Axis of Evil” for a while. That makes us wonder, at least, if the Syrian people or the opposition made it to the “axis of good” or is it simply “my enemies enemy is my friend”? And for the time being the Syrian opposition seems to find its way to the “shiny side of power” by entering a democratic and not communistic way. Such a way can be supported at first, with some retention.

But, did they really learn from their mistakes durch the NATO interference in Lybia, even if it turned out to be successful in the end or is it rather that Syria owns with Russia, China and Iran the “better”, i.e. more powerful allies? The belief of the “West” in the democratic rise in the Arab World does not seem to be that convincing. Maybe it is because this belief is not shown insistently and wholeheartedly enough. People will not forget that easily the hesitant attitude of the US and Europe when Mubaraks chair was shacking alarmingly. How sad is one really that the resolution was hampered by the veto of China and Russia and how effective would have such a resolution been? Until now, without a doubt, Assad did not make the impression that ineffectual and ill-conceived threads could detain him from anything. On the contrary.

Our thoughts and our respect should belong to the Syrian people right now, for its never ending courage and its drive for freedom. A virtue that does not seem to be existant elsewhere or has been lost somehow.