An Arabic idea finds its way into the world 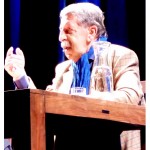 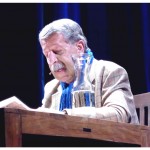 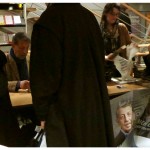 The final plea of Ulrich Kienzles closing an interesting, entertaining evening resonates: “It is for the first time that an Arabian idea “Kefaya – enough” finds its way into the world. From Tunisia, via Egypt and Lybia to Israel, Spain and Greece, where young people likewise protested against their governments. And if one wants to you can file the “Occupy Wallstreet” movement among that idea. An idea of international impact”.

Ulriches Kienzles reading of “farewell to 1001 nights. My wish to undertstand the Arabs” was initially fokused on his book of the same name. However, that the evening did not turn into a sales event but lead to an interesting insight into the life of a foreign correspondent is owed to tragical, funny and bizarre stories in which Kienzle again and again embedded the evening. There was comparatively little reading then. However, there was much narrating, that much, that Kienzle (unfortunately) had finally to be stopped by his attendant and interviewer.

At the beginning of the almost two-hour “lecture talk” Kienzle summarized the current events taking place in the Arab World, known as the “Arabic Spring”. He resorted to the trigger of the disturbances in North Africa more than a year ago in Tunesia when a greengrocer burned himself out of protest in front of a police station. “Four dictators”, Kienzle said, “have gone”. Ben Ali in Tunesia, Mubarak in Egypt, Gaddafi in Lybia and Saleh of Yemen, who initially escaped to Saudi Arabia and then to the United States. “It is not for sure”, Kienzle continued, whether Egypt will be reigned democratically”. 70 % of the Egyptians voted for islamist parties. The West is afraid of this islamism. For this reason, Kienzle assumed to the military history of the country. The army is supposingly the biggest employer in Egypt and after the defeat in October 1973 the military was divided into two “camps”: in a military and an economic camp. That is to say that the military does not only control the defense sector but also the economic fate of the country. It is therefore the question whether the military is willing to give up its power, Kienzle closes his excursus. Moreover, he set up the hypothesis that the “Facebook-Generation”, which initiated the Egyptian revolt, belongs to the “losers” because they could not convince the people of their ideas. This theses is not totally wrong, however, it has to be questioned, in the light of the fact, that the country has suffered for centuries from a “one-party-rule”, so that the democratic thought of co-determination is a new one. Let’s give them some time.

Kienzles narrative excursions into his pre-near east-correspondent-times were likewise interesting. After his studies of political science the native Swabian started his career at the SDR (German regional TV station) where is first film documentary was almost ruined by a narrator who did not want to speak. Today it is almost unimaginable that his reports had to be sent from Lebanon to Germany for workmanship and cutting. Often those contribution were only broadcasted three to five days after they have been filmed. “Moreover I did not have the chance to watch my own films”, Kienzle moaned. His time in Lebanon, where he started his career as a Near East correspondent six months prior to the outburst of the lebanese civil war, seemed to have embossed the Swabian by its cruelty substantially. He talked about cameramen who did not want to shoot in the face of pick change anymore or had to drink alcohol in order to be able to bear incidents.

In a resume Kienzle summarises his impressions of the “Arab Spring” : “The losers of the movement seems to be the women in Egypt and Lybia on the one hand and the Israelis on the other hand. The latter perched on Mubarak for too long. He counts Turkey among the winners, that especially won points during the Lybian revolution when Turkey sent a hospital ship to Misrata to help the people over there. That impressed the Arabic World lastingly and evocated positive feedback. “This is why the Arabic revolutionists want the Turkish government model”. Turkey found a new role within the Arab World by this. And maybe that is why, they do not want to belong to the European Union anymore. And maybe Europe is going to regret this one day as it lacks the connecting bridge into the Arabic World.