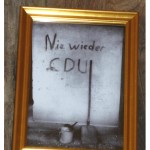 There is some good news: The break-out of the so called „Arabic Spring“ that started in January 2011 in Tunisia caused a sudden movement within the German perception of the Arab World. The downer: Once again the West wants to gain control over the development in this strategically important region based on “legitimate personal interests”. That is how the white paper of the Konrad-Adenauer-Stiftung (KAS) puts it. The paper was written by PhD Martin Beck, in his capacity as head of theJordan Office in Amman.

This white paper”Political cooperation with the countries of the Near East/North Africa” is not half bad. At times it produces incomprehension in the face of many arguments which are being put on the table without giving corresponding substantiating examples. Then it is the usage of buzz words like“Good Governance” or just of those “legitimate personal interests”, whose criteria might be hardly known to anybody. Is it meant as a political puzzle? Because, what sounds important must be good and just?

The political alignment of the paper however leaves no doubt to the reader at any time. Israel, for example, is described as the sole consolidated democracy (again one of the terms which are not specified) of the region (wieder so ein ungeklärter Begriff!) and thus serves as a true example. Even more surprisingly is the (sudden) positive illustration of Turkey as a country where “the charateristics of a negative development taken place in the Arabic World do not apply” (Seite 3).

Overall, it is really hard to follow the author’s train of thought in the face of the very single-sided, insufficient and in places completely unfounded contents. Therefore I would like to highlight some passages to demonstrate my resentment, make it more clear.

I would like to start with the symptomatic confession given in the preface of the white paper by Dr. Gerhard Wahlers, deputy secretary general of the KAS: “… that Europe and Germany have also legitimate personal interests towards the Near East, especially within the sectors of safety, energy and economy”. This honest sentence defines the papers tenor. Translated this indicates for Mr. Wahlers the legitimate right (in this context it would be interesting to know what is a legitimate and an illegitimate personal interest to Mr. Wahlers) of the West, to secure the access to the region’s raw materials. Because safety does not mean the safety of the domestic population, but the safe access to raw materials and thus to economic prosperity of the west.

The white paper’s author Martin Beck divided the document in the following into ten recommendation points which he considers suitable for the formation of a new Near East in the course of a political accompanying process by foundations such as the KAS. These ten points are then explained at length on the following eleven pages.

In the context of the German-Israeli dialogue the author mentions the necessary improvement of the political and economical integration of the “Arab Israelis”, a little on the short side. Precisely this would have been an interesting point to discuss and let people know how the KAS intends to push such an integration, using what means and what the final results could be looking like. At that point like said before the paper remains vague.

The repeated emphasis on the good and important relations with Turkey is striking. This appears to be insofar weird as that country can be called a “waiting state” for an EU membership since some time. This raises the question whether this importance in the context of the shortfall of reliable partners such as Mubarak or Ben Ali and Gaddafi at last to curtail the „European refugeeproblem“?

On page eight the author emphasis the KAS’ orientation towards certain values dedicated to a Christian idea of men and that political cooperation might be most successful where a consensus of values exist. Does this refer to a Christian, religious or a consensus leading to stability which secures the economic success of the West in the region? This is evidence that various thing remain nonspecific.

A further disputable point is the accentuation of the (successful) democratic ambitions of Asia, Latin America and sub-Saharan Africa (notably Brasil, Chile, China, India, Indonesia, Korea, Mexico and South Africa) in comparison to the Arabic countries along with their problems with corruption. A look on the corruption index 2010 by Transparency International should clarify the circumstances. As mentioned before it is especially weird that the paper neither critical nor positive assumptions are backed up by documtented examples.

I do not like to make a fuss about the controversial topic of persecutions of the Christians in arabic countries that the author brings up with the comment on a increased migration of the same. Just two questions to start a critical thinking process. Firstly: Who are those Christians in the arabic world. Are they a homogenous group of people with whom Christians in the West can identify themselves? Secondly: Is there reasonable suspicion that the conflict is politically misused since the times of the crusaders?

The author considers it best for the Arabs to introduce social market economy. Because, thia as an explanation, „as could be witnessed not only in the west but also elsewhere in the developing countries on every mainland democratic transformation is the best solution to solve political as well as economical and social problems in the long run“. And if those transformations lead to „Good Governance“, than direct investment by foreigners is much likely. This sounds a little bit naiv in the face of the (confirmed) assumption that assets go where benefits are luring. As an example China and India can be mentioned where rule of law is missing and enterprises are queing up for opening a business.

A responding to the long rigmole „women rights“ and „Islamism“ seems not wise at this stage in order not to blow up the article unnecessarily or just to foil it – I leave that to the KAS white paper. To give an example: On page 13: „Women in the arabic world do not have equal chances in their job-related development and participation. Then, on page 16: „Women account for more than half of the students at many universities“. Well! Everybody who wants to read more about such discrapancies should have a look at the paper, pages 12-14.

The single-side description of the arabic world on long passages of the paper concludes with „ten demands towards the German and European (development-) policy“. Those demands can be summarized in one sentences, in my mind: Germans were late for the first wave of colonisation, but they like to make sure this will not happen a second time. As a splint of the text I would like to mention the following signal words/sentences: a) conditional granting of humanitarian assistance, b) the concept of social market economy in the Near East has to be supported intensively, c) Regime who conform to western requirements have to be supported and d) the development goals and the protection of the environment in the Near East should serve German and European interests.