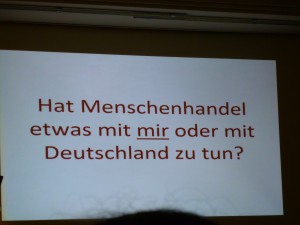 Last wednesday (03.06.2015) a poster exhibition at theHaus der Kulturen addressing “human trafficking – here and today” opened. Here are a couple of facts stemming from the portrayels of the key not speakers as well as from the corresponding poster exhibition: next to the trafficking of weapons and drugs, human trafficking ist one of the most lucrative businesses worldwide and is one of the most profitable sources in income. The victims of human trafficking that get stranded in Germany often come from East Europe, especially from Bulgaria and Rumania. If you look at this that way, the incorporation of those countries into the EU must have been a blessing for the slave trader and might have even given their business a further push. But be careful, if you think you have already discovered the one’s to blame and are about to lean back: please do not forget that the market is being determined by demand and supply. I.e., if nobody expresses a demand for cheap food, if nobody expresses a demand for cheap clothes and if nobody is looking for cheap sex then the former lucrative business of human trafficking will become dull instantly. Because a good that nobody wants will not be sold.Compris?

Thoren Biethan of Brunswicks police department reports that a “guaranteed sluicing” for women from Nigeria costs between 50.000 – 80.000 Euro per person. A great amount of money even for Europeans, but definitely a unimaginable high amount for somebody from Africa. What do you think does that money come from? Take a look at the girls of you local red-light district and start calculating how many punters one woman has to satisfy in order to pay 50.000 Euro back, considering that a 20 minute puter-prostitute-contact costs about 30 Euro and some puters even dare to beat that already cheap price down to 10 Euros. I have no clue what kind of person would exploit the distress of somebody else to that extent.

Article 1 of the German constitutional law states that human dignity is unviolable. Is that really so or does that only apply as long as the person in question is white, rich or has the “correct” relgious believe?

The statements of two forced prostitutes were thought-provoking to me and made me sad at the same time: “When men came to me”, a Nigerian forced prostitute explained “and saw my skin colour I felt them thinking that they can do everything with me.” Another woman from Bulgaria sharing the same fate, 34 years old, said: “We have to learn to act self-defendant. Until now I never had the chance to decide self-contained.”

I ride my bike home lost in thought and sad about the things I heard. Suddenly I realise how beautiful the street is that I ride down. I look at the green trees, listen to the birdsongs and have the sun shining in my face. I remember the lyrics stemming from a Herbert Grönemeyer song saying that: „Earth is friendly, but we are not!“ 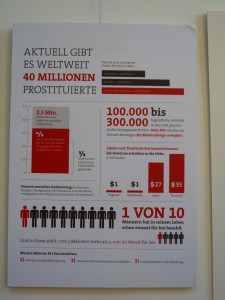