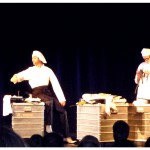 On friday the Berliner Compagnie premiered the play “Things are as bad as they look” at the Brunswieck Brunsviga. The play, subtitled “climatic disaster with music” is not only about the construction of a coal-burning power plant or more precisely about the legal hindrance of the same, but also about the destiny of a refugee. The refugee Ibrahim, who dared the long, burdensome and above all dangerous journey from Africa to Germany just to come to a country that neither respects him as a human being nor is interested in his sufferings.

Unfortunately, Ibrahim is not the only one. Complete nations, such as the Palestinians, seem to share the same fate. And especially the latter, in the form of its president Abbas, concerned the so-called “high-level” politics and a bunch of diplomatists last week. What has happened? A year ago President Obama amerikanische Präsident Obama promised the Palestinians in a speech held in front of the UN-General Assembly an autonomous state. This state does not officially exist up to now. Is it a wonder that Abbas demands the delivery of that promise in this year’s UN-General Debate? Obama, who announced his veto within the UN-Security Council, seems to be flat on his back in the face of the Palestinian decidedness.

But, not only in this respect he does a bad job. Last Thursday the Afro-American Troy Davis who has been kept in jail for more than 20 years – most probably wrongly – was executed by lethal injection. The fact that death penalty is still in function and often – demonstrably – executes innocent people (preferentially black citizens) in a country where the president is a Nobel Prize winner is simply inconceivable and leaves me speechless.

Rightly author Christina Bergmann talks in her article of 22.09.2011 of a disenchanted super power, that simply overslept the Arab Spring. Because: “the initiative of the Palestinian leadership is […] an expression of a legitimate impatience: For how long will the international community states be waiting, how long will above all Israel be waiting, until it grants the Palestinian people a credible perspective for a soon state formation”, Rainer Sollich asked in his article “Security Risk Palestinian State ?“

Time Out, Barack? Maybe the power of Social Media combined with the blind roller that took him to presidency surprised Obama the most and threatens to overrun him in the meanwhile, because clever politicians from France and from Turkey had pull the rug from under his feet by now and announced their will to catch up? 2012 is an election year in the States. The incubus is that Obama’s rivals represent even less acceptable alternatives to the presidency than the officeholder himself.