A close look into the abyss called soul 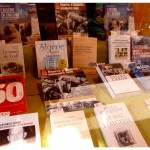 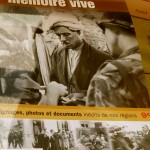 Travel guides are an important device. They are good for orientation on-site. They deliver important information on budget hotels, on shopping malls and hip restaurants. Sometimes, however, they can do even more: they initiate the encouter with (the own) history and therefore with the past. The changeful German-French history seems to be particular present in the Alsace.

Already in 357 AD the Alemanni tried for the first time to acquire this delightful spot under their wings. From 389 AD on they crossed the river Rhine and seddled down in Alsace. In 496 the face-off between the Franconians and the Alemanni got worse. In the beginning Merovingian king Chlodwig succeeded in the integration of Alsace into France. In 842 the Kingdom of the Franks is segmented into a French and into a German part. In 925 under the rule of King Henry I. Alsace with Swabia is affiliated to the dukedom Swabia and Alsace; in 1226 the city of Colmar becomes Free German imperial city.

Alsace is likewise affected by the Hundred Years’ War (1339-1453) and the Thirty Years’s War g (1618-1648) as well as by the French Revolution (1789/90). In 1798 the city of Muhouse becomes French after it had belonged to Swiss since 1515. The consequences of all these wars and “territorial changes” for the population can only be predicted.

In 1870/71 Alsace-Lorraine becomes part of the German Empire by the “Frankfurt peace treaty”. Particular the World War I (1914-18) affects Alsace. With the Treaty of Versaille Alsace-Lorainne becomes again French territory. During Wordl War II Hitler absorbed Alsace into the National Socialist German Empire.

To sum it up one can state that Alsace had been “the bone of contention within a borderland area” again and again in its history. Particular from 1870 to 1945 the district was hard-fought for between the two neighbouring countries – Germany and France. Since then, its borderland nature made Alsace a riven region, which went through three horrible wars within 75 years with disastrous consequences for the population. In August and September 1870 there was a voley of 200 000 artillery bullets only in Strasbourg (!) which destroyed 450 buildings completely.

I particularly registered the violent and brutal times of “Third Reich”. On June 28th, 1940 Hitlers troups invaded Strasbourg. A third of the population fleed from the Naziterror to south of France. The civil government, directly subordinated to Berlin, turned out to be particular cruel left side of the river Rhine (concentration camp Struthof at Schirmeck). From 1942 on Alsation were forced to fight in the German armed forces and were often sent to the Russian front line.

With the entry of General Leclercs in 1944 in Strasbourg Alsace witnessed its fourth change of nationality within a period of a three-quarter century!

Our first destination, after a “coffee break” in Colmar and Eguisheim, was Munster. From the travel guide I learned that this little town was affected by heavy destruction during World War I as the front line ran directly through the village! This information leaves me with a queasy feeling in the stomach. Our hotelier talks naturally in German to us. He also speaks – of course – French but also English. I wonder what he thinks about Germans. I cannot get rid of feelings of dismay and depression.

On a walk through Colmar the display of a book shop caught my eye. The window is full of books reminding of the war in Algeria which took place 50 years ago. I sense that many nations did unjustice in times of war and that many things have to be reprocessed. The process of coming to terms with one’s past is a barely discussed subject in public. Thereby there seems to drowse an abyss ini the soul of many nations which needs to be healed.