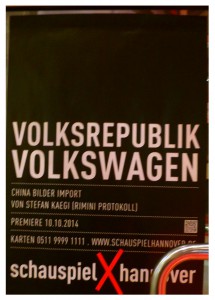 The fact that German companies do have production locations abroad and do provide new jobs though which have been decruited before is nothing new. Globalisation is the corresponding magic word that seem to explain it all: closing of locations in Germany, revenue assurance abroad, predominance on attractive markets. What it personally means for German manager and their peers to relocate from Wolfburg to Changchun and vice versa often remains unenlightened in public. One settles in in a way and either writes bizarre E-Mails to the stay ins in Germany or sends video-messages to the family in China complaining about inadequate efficency of German workers. That’s the plot of the play “Volksrepublik Volkswagen“, which is currently shown at the Schauspielhaus Hannover.

In his production of “copied manager”, “hypertensive” PR-managers and “attentive morally-pointed VW accompanying wifes” director Stefan Kaegi seem not to care about intercultural know-how but the audience is left alone with a sequence of odditiees, strange and incomprehensible occurances. What the spectator makes out of the plot is up to him.

One thing however is obvious: A globalized “move-closer” of the world cultures is a myth, the protagonists remain in the own spheres and either try to make the best out of the situation or look forward to their return back home. In my point of view the plot unfortunately lacks the outlook of a possible cooperation. Or is it another colonization of the Chinese living environment as described once by David Bowie in his “Little China Girl”:

My little China girl you shouldn’t mess with me
I’ll ruin everything you are
You know I’ll give you television, I’ll give you eyes of blue
I’ll give you a man who wants to rule the world