“A good speech is an address which exhausts a topic but not the audience.” Unfortunately, the speaker of the grand opening on the occasion of the exhibition “Brutal modern – Bauen und Leben in den 60ern und 70ern” seem not to be aware of this Churchill rule. The speeches do not allow for a different conclusion. Well, the fact that the evening in spite of this bumpy start still becomes unexpectedly witty is a result of our British notion of humor.

Believe it or find out the hard way

Being a member of a publishing company I got an invitation for the grand opening. The exhibition’s topic sounded interesting to me and well, I must admit, that the chance of a free buffet was tempting as well.
We have a bad start though: Even though we are on time at the location, others were even more punctual. When we enter the sticky foyer of the Landesmuseum (it is one of the unusual hot autumn nights), the room is not only jam-packed but the seating is that close-fitted that even my “size-XS buttocks” (as one of my colleagues but it bluntly) cannot make it through the rows. The crux: Only two seats right in the middle of the interlocking chairs were still available and yes we do not intend to stand all the time. However, the narrow and provincial audience is different-minded and is not willing to either screw over much less to stand up in order to let us squeeze past. Well that situation only left room to do it the hard way so that we had to tread some feet, according to my grandma’s saying: “Believe it or find out the hard way.”

What comes next is real torture: 1,5 hours of absolutely uninspired self-adulation and name dropping in the most monotone manner. The start of curator Dr. Heike Pöppelmann is delightfully different and gives us a bit of hope, just to find us bitterly disappointed in the end. Allegedly this might be due to social constraints and administrative minutes which have to be obeyed. But instead of giving the audience background information on the contemporary indexing of the exhibition, such as the architect’s motives and constraints of that time or the sentiment of the former generation, the audience is being tortured with never ending boring details of the single facilitators and sponsors.

Just one cross for each person, well flower

Suddenly I wake up: In a final statement Mrs. Pöppelmann asks several co-workers and donors of items of display to the stage in order to thank them. On her right side there are four bouquets in four vases. And that takes the biscuit: “Normally” the four bouquets would be handed over to four persons. However, far from it all. Mrs. Pöppelmann disassembles the bouquets in its single parts (flowers) und hands each person one of them over. The scene seems so bizarre to me that I cannot believe that it is really happening. Honestly, I was temporarily thinking that this must be some kind of a joke. At the moment I realize that the buffet will be similar basic. Mrs. Pöppelmann is talking about cheese hedgehogs, however the last gig of the band is not really noticed by the audience, the battle at the buffet had just begun.

As soon as the buffet and the exhibition are officially inaugurated the crowd splits. The idealists see the exhibition first – the realists go for the buffet. And there it is, the embodiment of the frugal meal: Two cheese hedgehogs, two platters of small party rolls and pizza pockets for about 50 people (some turn already their back on it and decide to look for a restaurant in town). We realize immediately that we have to put on our beer goggles. After two glasses of wine our awareness is increased and we are up to mischief true to the motto: “have a giggle with someone over something.” And this is how it works: Due to inattention I dropped some bread on the floor. With this piece of bread we were free for a sociological experiment. At this point the buffet has been polished off the lot. However, the empty plates were still on the tables. That’s why we place the piece of bread right on one of the plates, to see what will happen. Just a minute later one of the guests spotted it – even though he was in the middle of a conversation – goes straight for it and grabs it as if he was reaching for the Holy Grail. I will never forget his delighted face when he held the swag in his hands while his dialogue partners gave him a puzzled look because he abandoned them like this. A priceless moment, pleased as punch, a little bit unfair however but infinite unique because it cannot be shared by the rest of the audience.

Wiping the tears of laughter off my face we have a look at the exhibition. We liked it because parts of the interior reminded us on our childhood. An interesting critique of the exhibition can be read here. 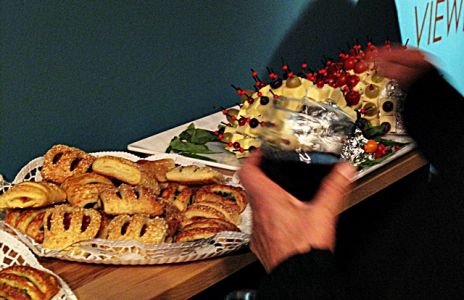 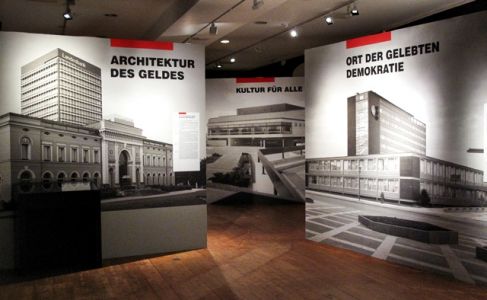 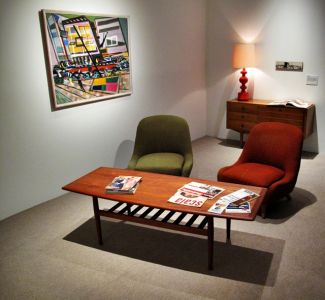 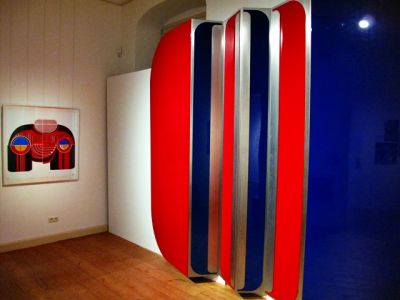 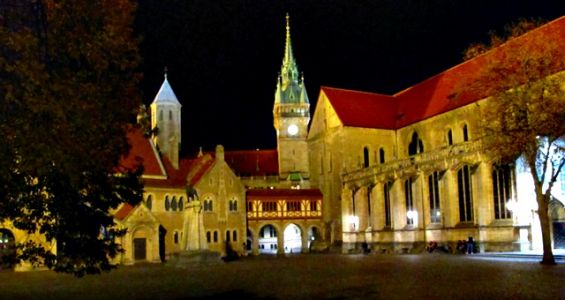